Hit enter to search or ESC to close
Activity PlanNews

As part of 2021 International Day of Monuments and Sites celebrations, the Museum of the Oldest Appellation in the World launches this digital itinerary. Comprised by several locations and relevant buildings that portray the centuries-old history of Real Companhia Velha. This itinerary is for all those who are interested to learn more about the historical path of the Company built on both sides of the Douro River.

This Spring gather your family and discover some of the most emblematic spots of Real Companhia Velha, located in both cities (Porto and Vila Nova de Gaia). We advise the use of appropriate clothing and footwear for all participants. And we inform you that the route presented may start at Real Companhia Velha headquarters (route with a lower elevation index) or at the Museum of the Oldest Appellation in the World (route where the elevation index will be higher). Good discoveries!

Note: Currently, due to the epidemiological situation, both spaces of Real Companhia Velha are temporarily closed to the public.

Between 1:25h (walking) to 2:00h (with stops at the different points of interest)

Easy to Moderate (depending on physical condition)

Welcome to Real Companhia Velha, also known initially, as Companhia Geral da Agricultura das Vinhas do Alto Douro. This itinerary begins at the facade of the building where the current headquarters of the Company is located. This building is property of the company since 1972, year that it occupies the premises of the Real Companhia Vinícola do Norte de Portugal (headquarters of the previous company since 1889). In 1973 the company centralized all of its activity here.

The geographical extension of this complex is around 20,000 m2, comprised by a building dedicated to offices, technical department, reception area for visitors (where visits to the famous Port wine cellars start) and 2 warehouses dedicated to the aging of wines.

Currently, Real Companhia Velha stands out for being one of the main companies in the wine production and export sector. Being present in the national market, and also in 50 countries around the World. In addition to the headquarters, in 2018, the Company opened the Museu & Enoteca 17.56 (Museum of the Oldest Appellation in the World – where this route ends) and the firm also owns5estates located in the Alto Douro Wine Region (accounting for more than 500 acres of its own vineyards).

We will continue to unravel the history of what is considered the oldest wine company in Portugal, with uninterrupted activity throughout more than 265 years of history. Having been created by royal charter of King D. José I, on September 10th, 1756. 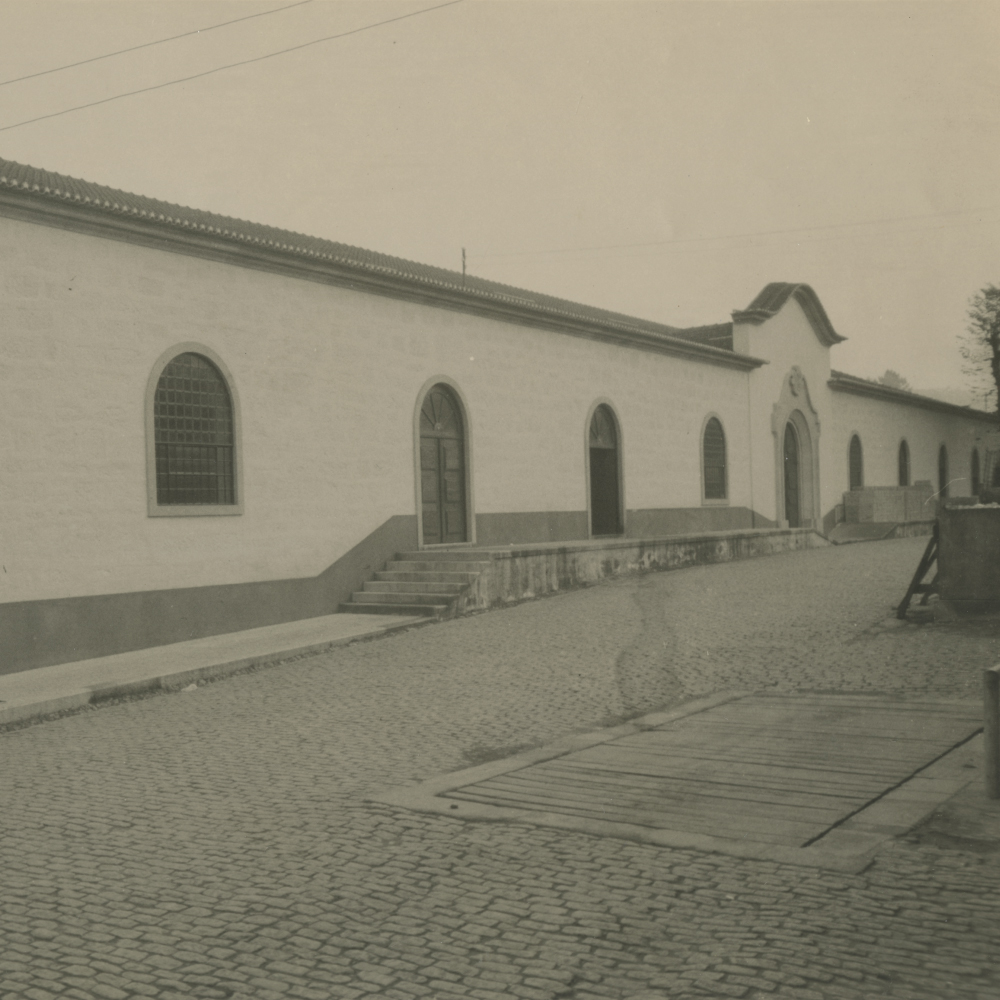 Reaching the second point of this itinerary, you will be able to contemplate the tiled advertisement panel with directions to visit the “Real Vinícola”. As we mentioned earlier, Real Companhia Velha moved to this industrial complex in 1972. The location we just visited, belonged to Real Vinícola, which since 1889 installed the company’s headquarters there. It should be noted that in 1963, this company was absorbed by Real Companhia Velha, in a period of strong expansion of the Company.

Despite the several difficult periods that marked the historical path of Real Companhia Velha, its evolution was marked by great progress and important public works, which we will mention ahead. In the middle of the XX century, Manuel da Silva Reis acquires the first shares of the Company, in 1955. Two years later, he assumes the direction of the company when he acquires the majority of the capital of Real Companhia Velha. During his tenure (the longest in the history of this company) Real Companhia Velha grows and consolidates its corporate position. In this setting, between 1960 and 1973, it acquired several companies in the sector, increasing its assets and business activity. During this phase, the Company also invests in innovative production methods, modernizing the company and increasing its capital. Making this one of the periods of greatest growth and dynamism of Real Companhia Velha.

For those who have already visited the Museum of the Oldest Appellation in the World, this point in the itinerary is nothing new, however for the majority of the population this is a totally unknown fact. The Companhia Geral da Agricultura das Vinhas do Alto Douro carried out several public works, not only in the Alto Douro Wine Region, but also in the city of Porto itself. Among several undertakings, the Company played a vital role in establishing the origins of technical higher education, in Porto.

In 1762, the Company implements the Nautical Class, which would serve to prepare the officers who manned the Porto frigates, for the protection of the Portuguese coast and the ships that were going to Brazil. Later, in 1779, the Debugging and Drawing Class was also created, which included courses in piloting, commerce and industry. Years later, in 1803, the Academia Real de Marinha e Comércio was implemented in the city of Porto, by the Company. The current location of the Rectory of the University of Porto, where several official classes were taught: commerce, mathematics and languages. For this reason, the Company Board was responsible for the inspectionof this educational establishment. In 1837, the Company was relieved of its duties as supervisor of the Academy, which was transformed into a Polytechnic Academy. During the 20th century, the Academy merged with the Royal School of Surgery (Escola Médico-Cirúrgica), in 1911, leading to the foundation of the University of Porto. 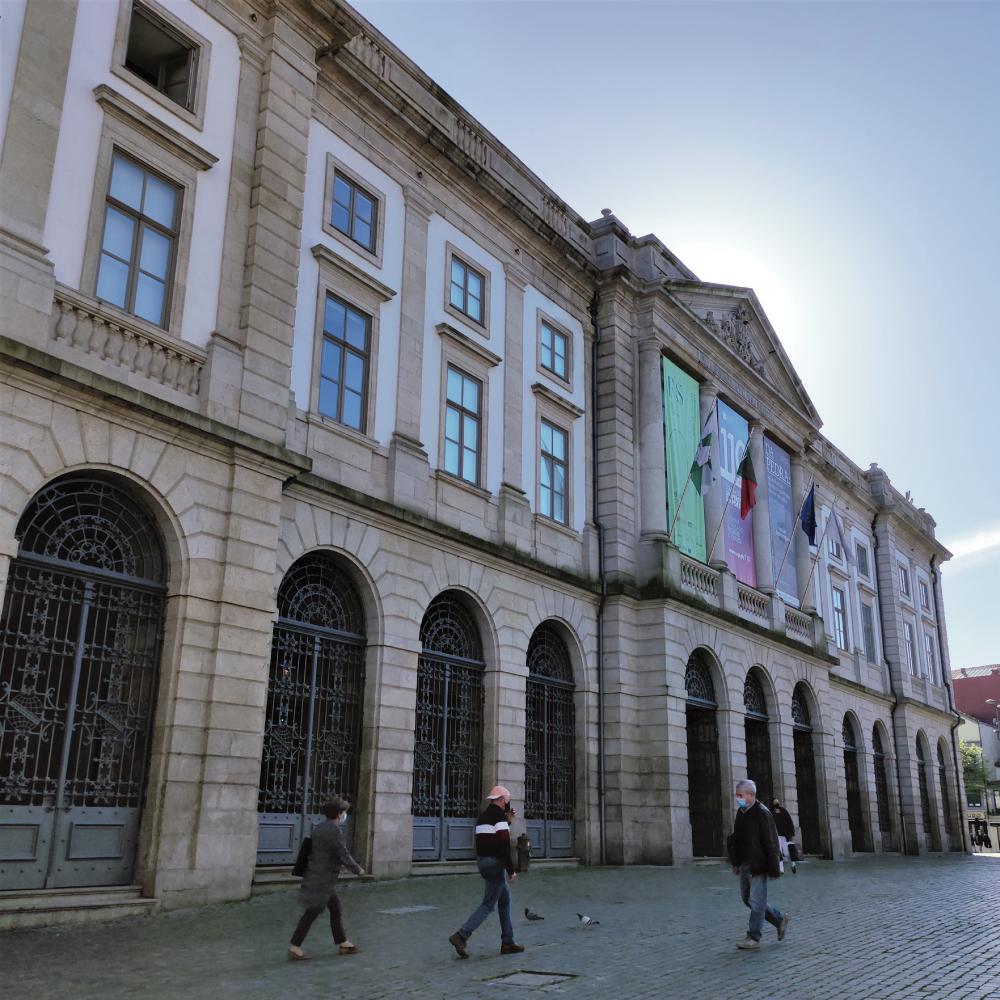 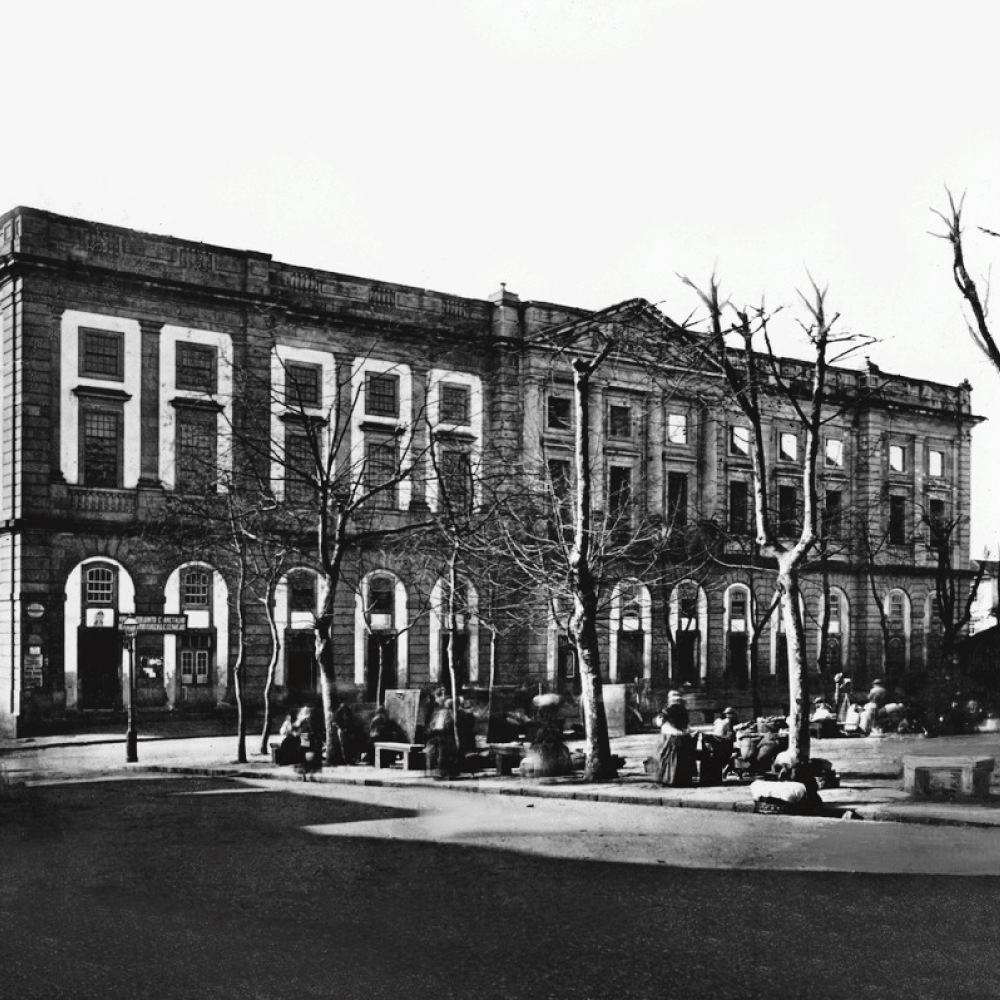 We are now in the middle of our historic itinerary and are currently in the former and first headquarters of the Company, still called today as “Casa da Companhia”. This 16th century building, initially a family house, is located in Rua das Flores. Having been shaped with the architectural characteristics that we know today, was built by order of Francisco Neto de Figueiroa. The Companhia Geral da Agricultura das Vinhas do Alto Douro rented this house from 1756 until 1805, when the property was acquired. Having established its headquarters there, more specifically “its office of dispatch, secretary, accountant and office”. The company’s headquarters would then remain here until 1961.

As we saw earlier, Real Companhia Velha was founded by King D. José I and for that reason it was a majestic company, with diverse privileges and public powers. Being an institution depending directly from the king, it was independent of thecourts, had its own jurisdiction through its Court of Registrars. And was endowed with public duties to regulate the production and sale of wines and to set prices, it also had the powers of an administrative police force.These privileges and powers remained unchanged between 1756 and 1834, the year in which the institution lost all privileges it held.

Its origin lies in the economic and political context of the country in the mid-18th century. In particular, the economic crisis linked to the export of Douro wine, and the trade and economic reorganisation carried out by the Prime Minister – Marquis of Pombal. The Companhia Geral da Agricultura das Vinhas do Alto Douro was incorporated by a large number of shareholders who were the “Good Men” from Porto and the main farmers in the Upper Douro region. 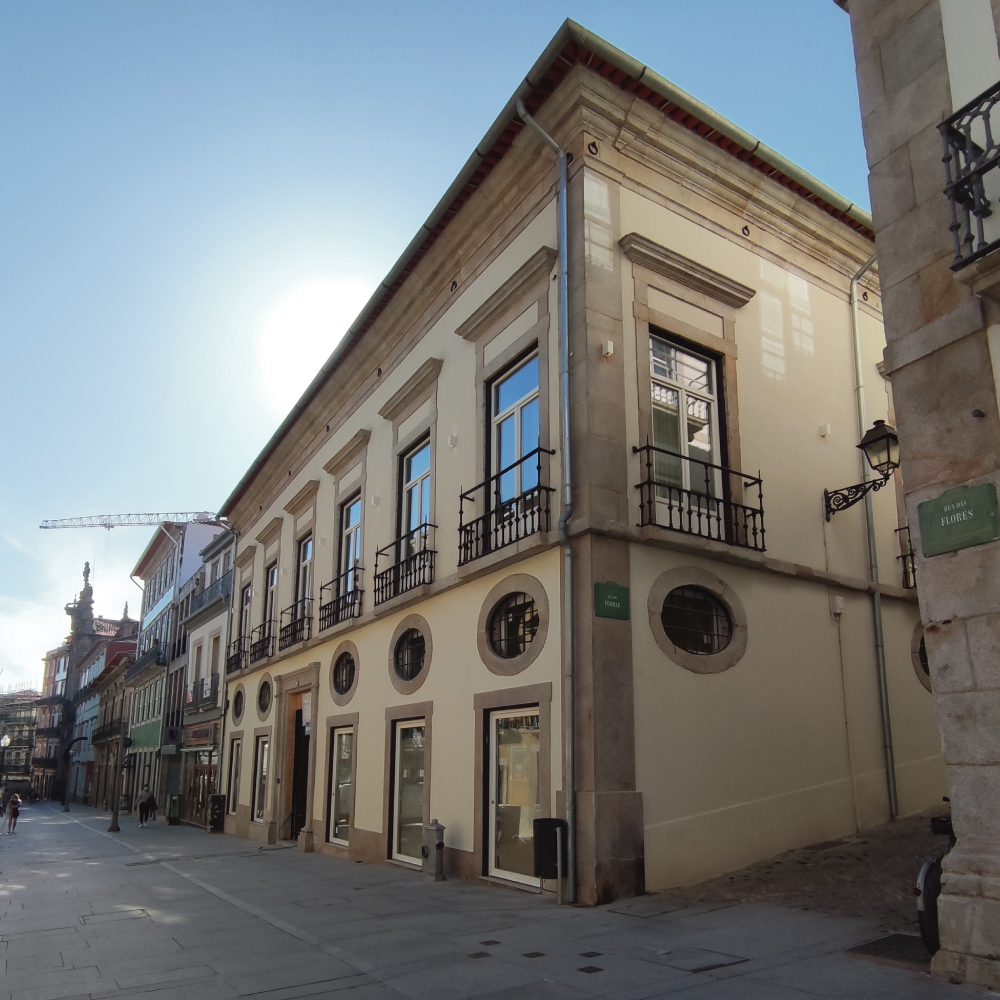 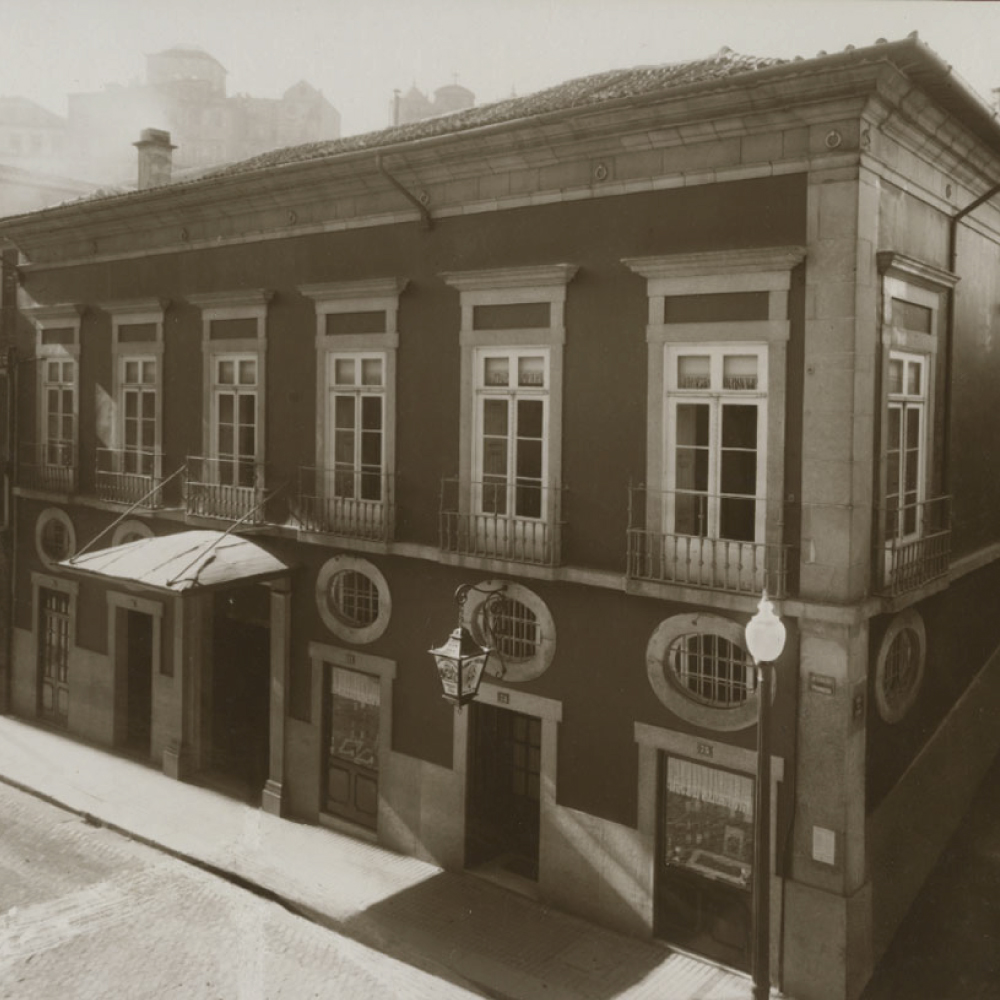 Considering that Real Companhia Velha played such a prominent role in terms of Port and Douro wine export, the company owned several warehouses both on the riverside of Vila Nova de Gaia and Porto. Just like this building, initially a warehouse of the Company and currently, occupied by the Consulate of the Estonian Embassy, in Porto.

One of the measures established by the Company was the acquisition of wine to regulate the market, also having a right of primacy in the purchase of these wines. The Companhia Geral da Agricultura das Vinhas do Alto Douro also held the exclusive right to supply wine to taverns in and around Porto and to produce and sell brandy in Porto and the North region. In terms of commercial exports, its privileges were also numerous, as a majestic company. Having, in particular, the exclusive trade of wines, spirits and vinegars with Brazil, until 1777. Thus, Brazil was one of the most important international markets for the Alto Douro wine (a position it still holds today). Equally relevant was trade with England in the 18th century. As early as 1779, the Company expands its business to Russia and the Baltic States, and in the 18th and 19th centuries, it even exported to the newly formed USA and other parts around the world.

Having traveled the Ribeira area, we now reach a location with a memorable landscape, combining an emblematic river and two cities that grew and prospered on the river banks.

As we have been referring to throughout this itinerary, the Companhia Geral de Agricultura dos Vinhos do Alto Douro carried out several public works, not only of an academic scope, but also in terms of the transformation of the territory. The main work will obviously be the Demarcation of the Alto Douro Wine Region (which we will address in the next and last point of this itinerary). However, many other public works were carried out for the development of the region, the city of Porto and the wine produced in the Douro itself. As part of the navigability of the Douro River, the Company proceeded with the destruction of many springs and fishing places and the Valeira waterfall, thus enabling the navigability of the Douro river from the border with Spain to the mouth of the Douro. The Company supervised works on the Douro bar and the construction of the quays along the river. Havingbuilt many roads in the Upper Douro and the riverside road from Porto to Foz. Also bridges and warehouses were constructed, endowing the region with several fundamental infrastructures for its economic, social and educational development. 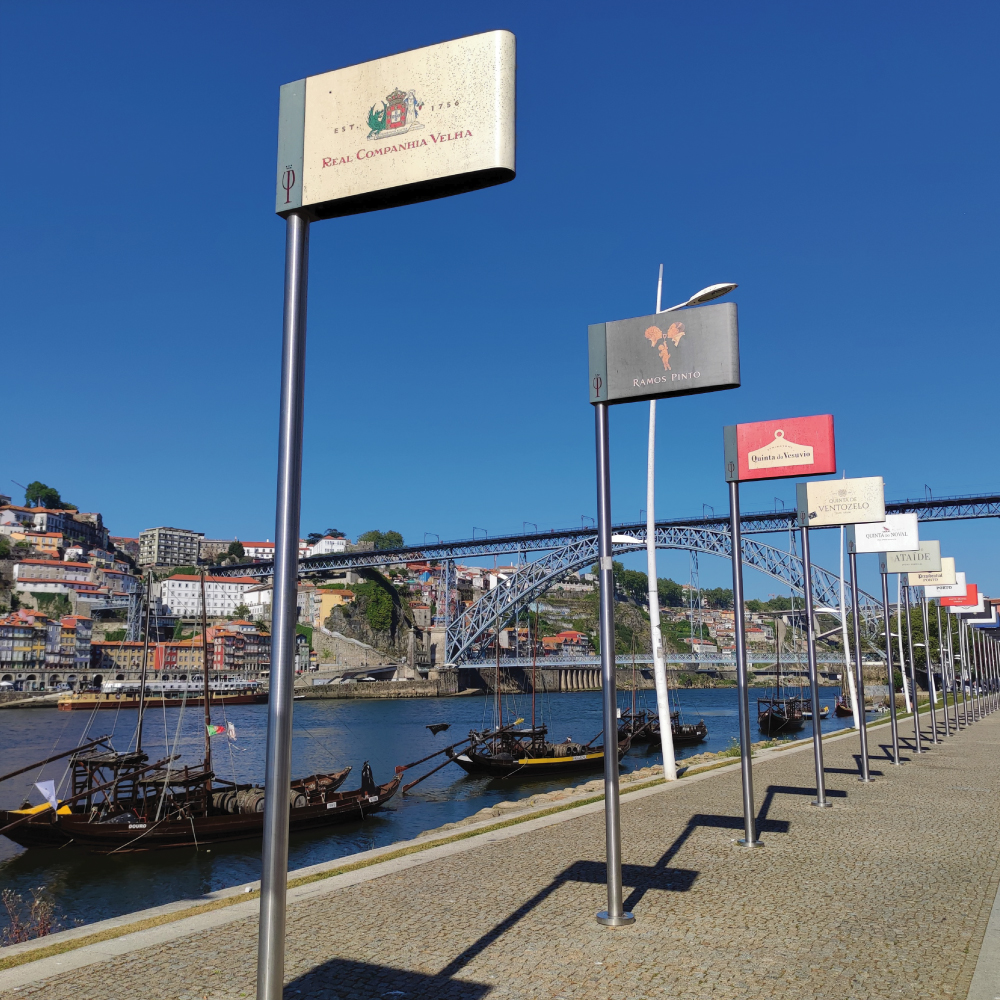 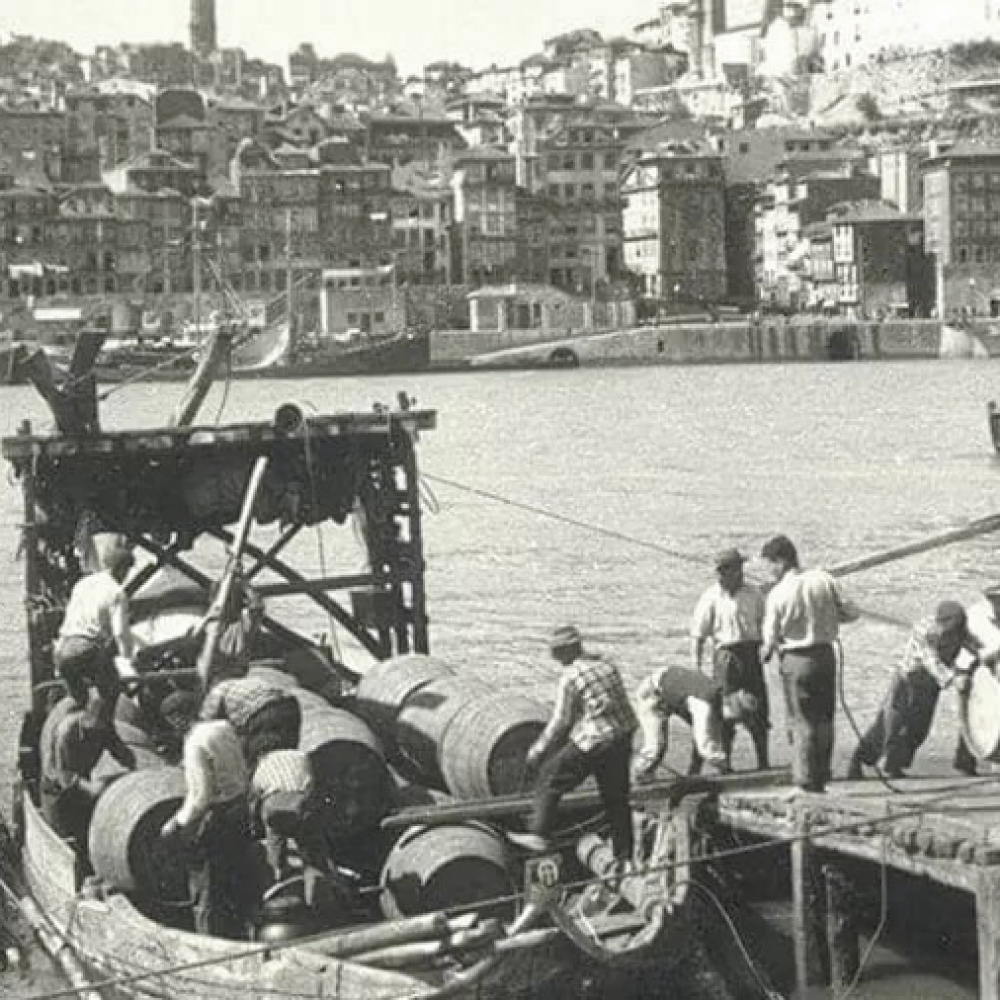 This Museum located in the Museu & Enoteca 17.56, was created in 2018 by Real Companhia Velha, as a place of sharing and remembering of the history of this secular company. The combination of the restaurant on the 1st floor and the Museum on the ground floor gives this space a unique concept, where gastronomy merges with culture, and is currently considered a reference spot in the city of Vila Nova de Gaia, presenting a distinctive offer in the region.

The Museum was established in the building of the former headquarters of Real Companhia Velha (located here between 1961 and 1972) and where some of its warehouses were also located. For this reason, this location was not randomly chosen, since it’s been used to promote the real estate heritage and the history of the Company. The permanent exhibition displayed in the Museum of the Oldest Appellation in the World is divided into 7 distinct areas that address these and many other themes related to the company’s history, and its role in the region. However, its primary focus is the main work carried out by the Company and its essential objective, the Demarcation of the Douro Region and the regulation of the production and commercialization of Port wine. This large-scale work took place in several phases: First Demarcation and Second Demarcation. Over the centuries, documentary records, maps, factories, and a diverse collection of items that have been preserved, exposed and studied, as evidence of the inestimable heritage value of Real Companhia Velha. Focusing in protecting, regulating and safeguarding an area that is today considered World Heritage of Humanity, the Alto Douro Wine Region.

At the end of this itinerary through the history of this secular company, you unveiled several facts, places and works that demonstrate the importance of the Companhia Geral da Agricultura das Vinhas do Alto Douro, also (and today) known as Real Companhia Velha. This former chartered company was a driving force of economic prosperity, political influence, social and cultural prestige in the city of Porto and other surrounding geographic areas. Real Companhia Velha, by providing the city and the geographical area with the various infrastructures that we discovered along this route, contributed to a unique identity in this entire region and to the Alto Douro wine region itself. Which we will invite you to discover soon. 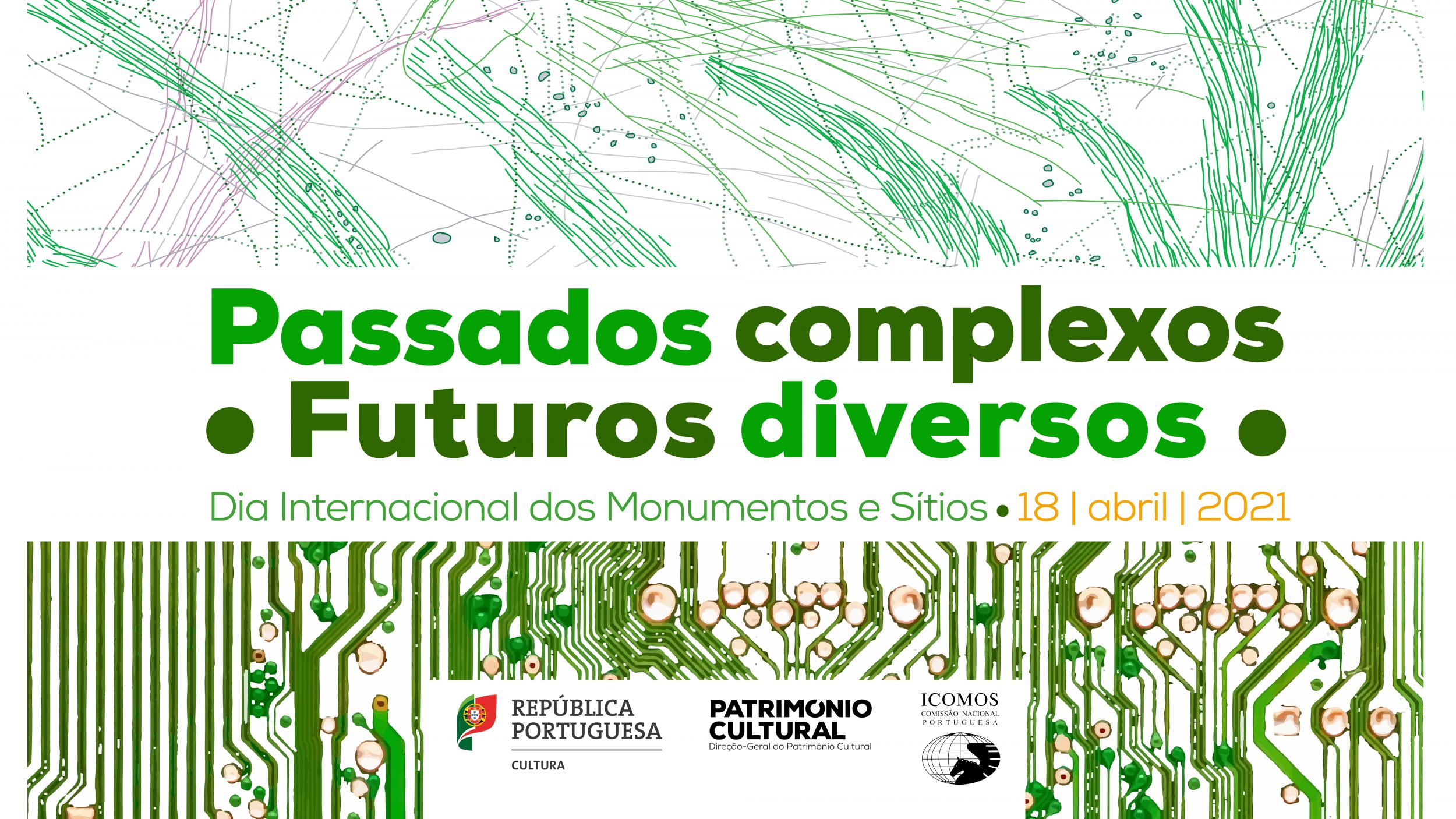 Nº OF VISITORS OF THE MUSEUM